Could you tell us about yourself? Where are you from, what do you do, etc.?

I’m an American, originally from Seattle; I spent 10 years working for the world’s largest mouse in Florida, and now I live near Phoenix, Arizona. I’ve been an illustrator and designer off and on for over 20 years, and I’ve made a few fonts just for fun over the last 10 years. Design was mostly a side work for me; my day jobs have been as varied as a pizza cook, casino dealer, and game show host. It’s only in the last couple of years that I’ve concentrated on graphic design. Right now my primary work is creating fonts, though I also do some custom lettering and illustration work. How did your design journey begin?

I’ve been drawing since I was little, which eventually evolved (through years of practice and classes) into cartooning and illustration. Drawing went hand-in-hand for me with lettering, which is just another type of drawing. No matter what job I was working, I was always the person who people would go to when they needed something written by hand. Most of my design knowledge was self-taught, and a lot of it was somewhat outdated, so I took a one-year graphic design course to update my knowledge and fill in any gaps. While studying the typography portion, I decided to see how font creation software had evolved, since it had been a few years since I’d tried it. Something clicked, and I fell in love in a way I hadn’t before. Where do you usually find your inspiration?

Unfortunately, my brain likes to start running at high-speed when I wake up too early in the morning. But it’s also a time when I get a lot of great ideas. So often, it’s a case of one of our cats walking over my head at 3 AM, waking me up, and my brain decides that it’s the perfect time to start thinking about work. It stinks to be awake earlier than I want to be, but I think some of those ideas that come out of that space between sleep and being awake can be the best ideas. A lot of them are really weird, but a lot of them are really pure and awesome too. Any favorite design references that you can share that might be helpful for other designers as well?

One of the most important things I’ve ever purchased to do my work is a book: “Graphic Artist’s Guild Handbook of Pricing & Ethical Guidelines.” It’s a big, thick paperback full of advice about how to price your work, whether you’re designing a font or an illustration or a magazine ad. (It’s so easy for designers to underprice themselves; so many of us have the feeling of “it’s just something I made, it can’t be worth THAT much.”) What are the most common design problems that you face?

With fonts in particular, it’s coming up with fonts that aren’t too similar to things that have been done before. Handwriting fonts are having such a boom right now, it’s easy to complete an alphabet, then suddenly happen upon an existing font that has a lot of similarities. I also have perfectionist tendencies, so it’s been a process getting to the point where I can decide that something is good enough, and setting it free to the world, instead of nitpicking it forever. Final question, do you have any advice or tips for anyone starting to sell their designs?

I highly advise giving away some freebies to build your audience. As I was getting to know my font software, and learning the different features it had, I created around 10 fonts. I felt they were decent, but not good enough to sell yet. So I gave them away on my Behance page and built a following there. By the time I was confident and comfortable enough to list a font for sale, I had an audience already who knew my work and my style. I still do freebies now and then, as a thank you to all of those folks. A Fabulous Bundle for a Fabulous Month! 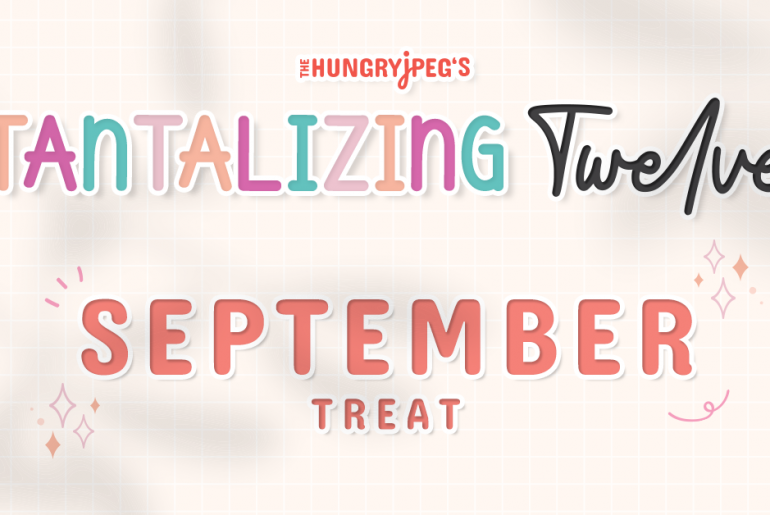 Fall Fiesta Bundle: Enjoy the 2-in-1 Bundle with 20% OFF from TheHungryJPEG

Illustrator Of The Week: LoveWatercolorStore | TheHungryJPEG